Adding Years To His Life 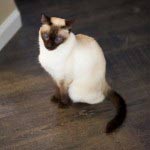 So here is a pic I just took of Lincoln.  He’s doing so well I can’t even express how happy we are with our switch to raw!

Ever since we first welcomed Lincoln into our home he has had problems with his stool being very soft.  After multiple trips to the vet over his first year with us, and multiple tests and exams it was determined that he had Irritable Bowel Syndrome.

Our vet put basically instructed us to try different proteins and foods until we found one that didn’t upset Lincoln’s tender stomach too much.  The idea was to try to find foods that had the least amount of fillers and other byproducts that they suspected were causing his problems.

We tried every protein you could buy.  Each protein/food change resulted in what appeared to be solid stools, but the good times would only last for about two weeks before Lincoln would start back to his soft and incredibly STINKY stools again.  During times of stress his bowel movements would be pure liquid, sometimes as often as 5-10 a day.  When these “flare ups” would occur we would start a round of steroids and flagyl until things calmed down again.

Well after a recent home remodel and relocation Lincoln’s stress levels obviously elevated and so did his IBS.  This time, steroids and flagyl were having NO EFFECT!  I was totally lost as to what I could do to help him.  So to the message boards I went…and that’s when I found Feline Instincts.

I tried a small bag first just to see if Lincoln would eat it.  To my surprise he was hesitant and would only eat small bites here and there for the first few days.  However, after the first week things began to change.  Lincoln’s diarrhea completely stopped.  I could actually tell he was feeling better just by the way he acted and ate.  He began eating better and craving food more.  He’s gaining weight like he never has before, he’s stooling only once every day or so, and gone are the days of sulfur smelling stool – it really is completely odorless!

It’s been nearly 4 months since we started Lincoln on Feline Instincts.  We use store bought ground turkey that is 15% fat and mix using the instructions on the package.  We usually mix the entire bag and freeze it all.  It’s incredibly easy to mix, only takes a little bit of your time, and it is without a doubt ADDING YEARS to my precious little Lincoln’s life.