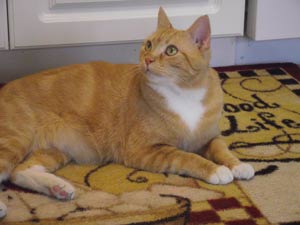 Decker was found in June 2012 eating sunflower seed shells in my back yard and live trapped 3 days later.  He only weighed 6lbs, was merely a skeleton and was very ill.  We eventually found out he also had IBD and was stooling anywhere from 7-10times daily.  He did not respond to medications, etc.  Through some research I found the website for Feline Instincts and also conferred with Dr. Anna Gardner as an over the phone consultation.  I trialed the Feline Instincts mix about 2 months after I found him. In late February 2013 he now weighs 11.11 lbs.  His hair is now soft, he only stools once daily and he is the most energetic adult feline I’ve ever had…much to the dismay of my other felines. (The vet feels he is around 2-3 years old).  He is now a very happy boy.   We were prepared for him to not live a long time when we found him but now even the vet is impressed and told us to keep doing what we’re doing.  For Decked, this changed his life.   He remains on the Feline Instincts.
Pamela – KY 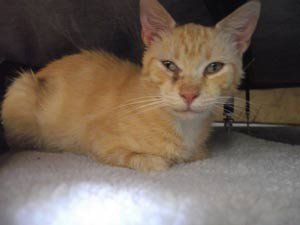 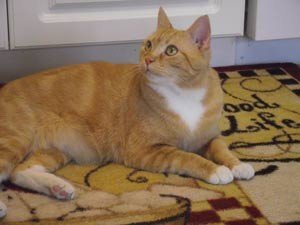