Just wanted to give you an update on my cat Milo’s health – after 10 years on your supplements for the raw diet.  I see his success story is still on your website when he was 2!  🙂

He was just at the vet, he’s 11yrs old now.  We never had him vaccinated and he’s never been outside, but when he started to drool, we took him to see a vet as we thought perhaps he had tooth issues.

He did have to have one tooth removed but the vet said he was the healthiest 11yr old cat he’s ever seen – muscular, his ears were clean, his teeth, he said, were the best he’s ever seen – there was tar on them but said some tar is normal but it was nothing compared to what he ususally sees in a cat that age.  He remarked on the softness of  his coat and after a solid check up, he declared he’s got a good strong heart and was healthy in every way.  He removed Milo’s problem tooth, but you wouldn’ve never known Milo had even been to the vet.  He was still spunky and playful as he normally. Still had a good appetite.

I must say, you and your product made a believer out of me – I said when I first put him on it (and I was skeptical!) that “time will tell”.  And time did indeed tell….he’s the picture of health 11years later!  THANK YOU! 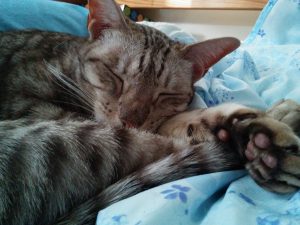