If left undiagnosed like it was in our beloved Caesar it will kill them. If he had been diagnosed from the start and the samples of worm I kept showing the vet here, he would have been able to live a much longer life. He was cheated of his life and so was I.

The incompetence of some allopathic vets is mind boggling to me! Get yourself educated…don’t think everything you hear from a vet is truth. They don’t know everything and many don’t think, let along think out of the box! They get complacent! 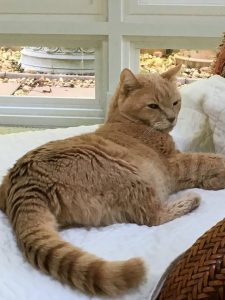 Liver Fluke Worms in cats will KILL them if left untreated! This is good reason not to feed your cat raw fish or lobster, keep them safe from eating lizards and frogs outside if you live in a tropical place like Florida, Hawaii and central America…

If your cat lives outside or in contact with frogs and lizards please read this. Many times a liver problem can go undiagnosed without knowing the cat has Liver Fluke Worms..

Opisthorchis felineus is a fluke which infects cats in much the same way as the other flukes listed above. Eggs in the water hatch into the miracidium form (free swimming) which infect passing snails. Once in the snail they undergo further developmental changes, leaving the snail as cercaria (a second free swimming larval stage) and infecting fish, frogs or lizards. Cats become infected when they eat an infected fish or reptile. Once inside the cat, the prey breaks down and the adult flukes pass through the stomach and to the bile duct and liver.

Low numbers may nor produce symptoms at all, however a heavy infestation may produce the following symptoms:

Diagnosis is made by examination of the feces for eggs as well as tissue and fluid samples from the liver.

Treatment is Praziquantel to kill the flukes and supportive care.

Opisthorchis felineus can be found in Florida, Hawaii, South America and parts of continental Europe.